At approximately 18:38 on 30th of August 2022, the T-FLEX, a remotely piloted experimental demonstrator used within the FLiPASED H2020 project, experienced an in-flight incident during a flight test segment at DLR's Cochstedt Flight Test Center. The encountered anomaly caused an impact to the ground. Due to adherence to the emergency response plan all the various data sources were recovered, such as the main log, transmitter logs and videos from all three cameras. Based on this data, an investigation will be made to find out the cause of the accident. There were no injuries or casualties. 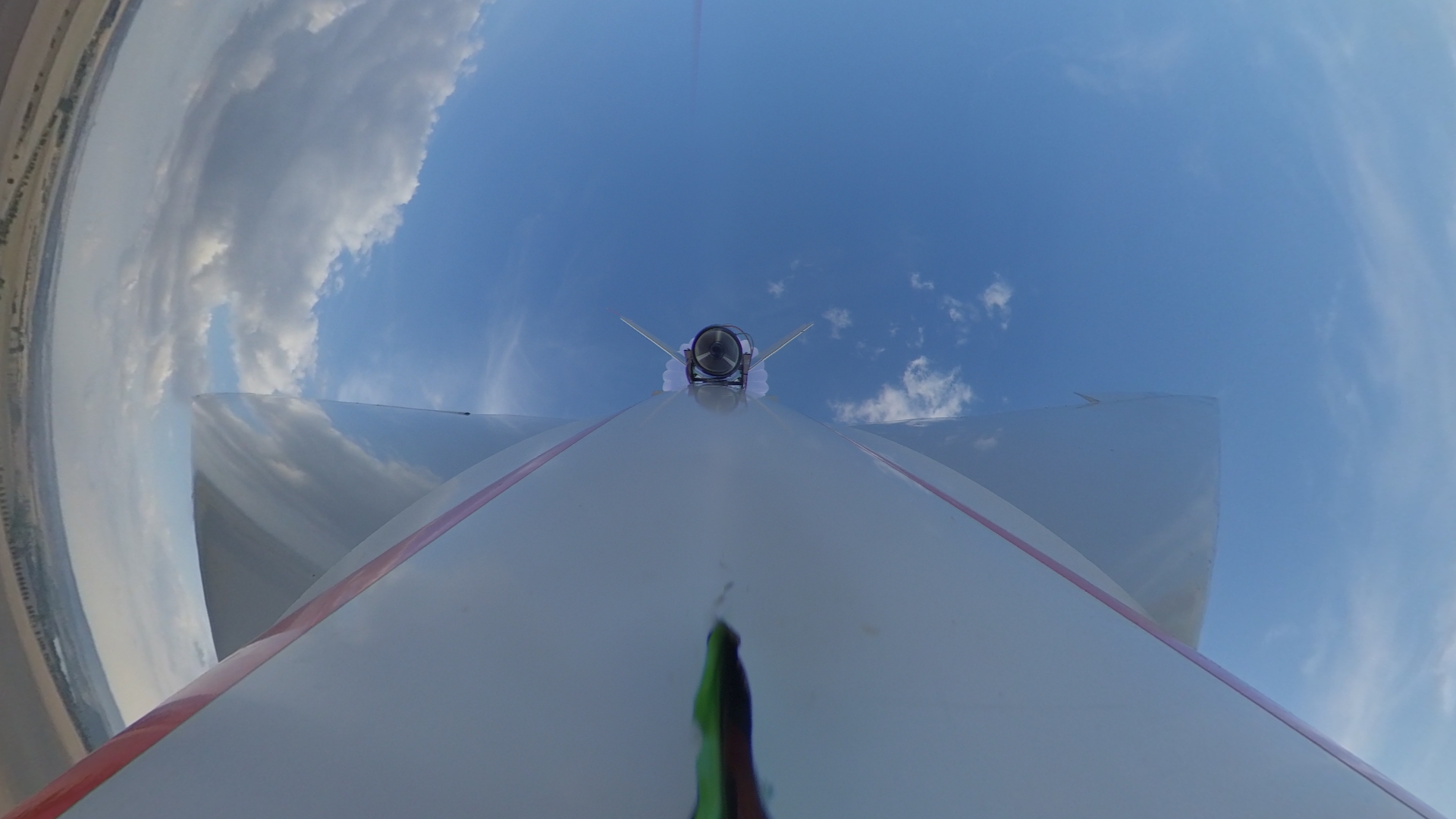 The flight test team of TUM and the avionics engineering team of SZTAKI started to prepare the unmanned demonstrator aircraft called T-FLEX for flight tests at the test airport of DLR at Cochstedt. During the first few days they solved some minor issues and after successful taxi tests they managed the aircraft to the air again. In the first week pilot training flight tests happened and the basic functionalities of the autopilot were tested. In the second week DLR team joined the flight test team and started to perform the system identification flight tests. 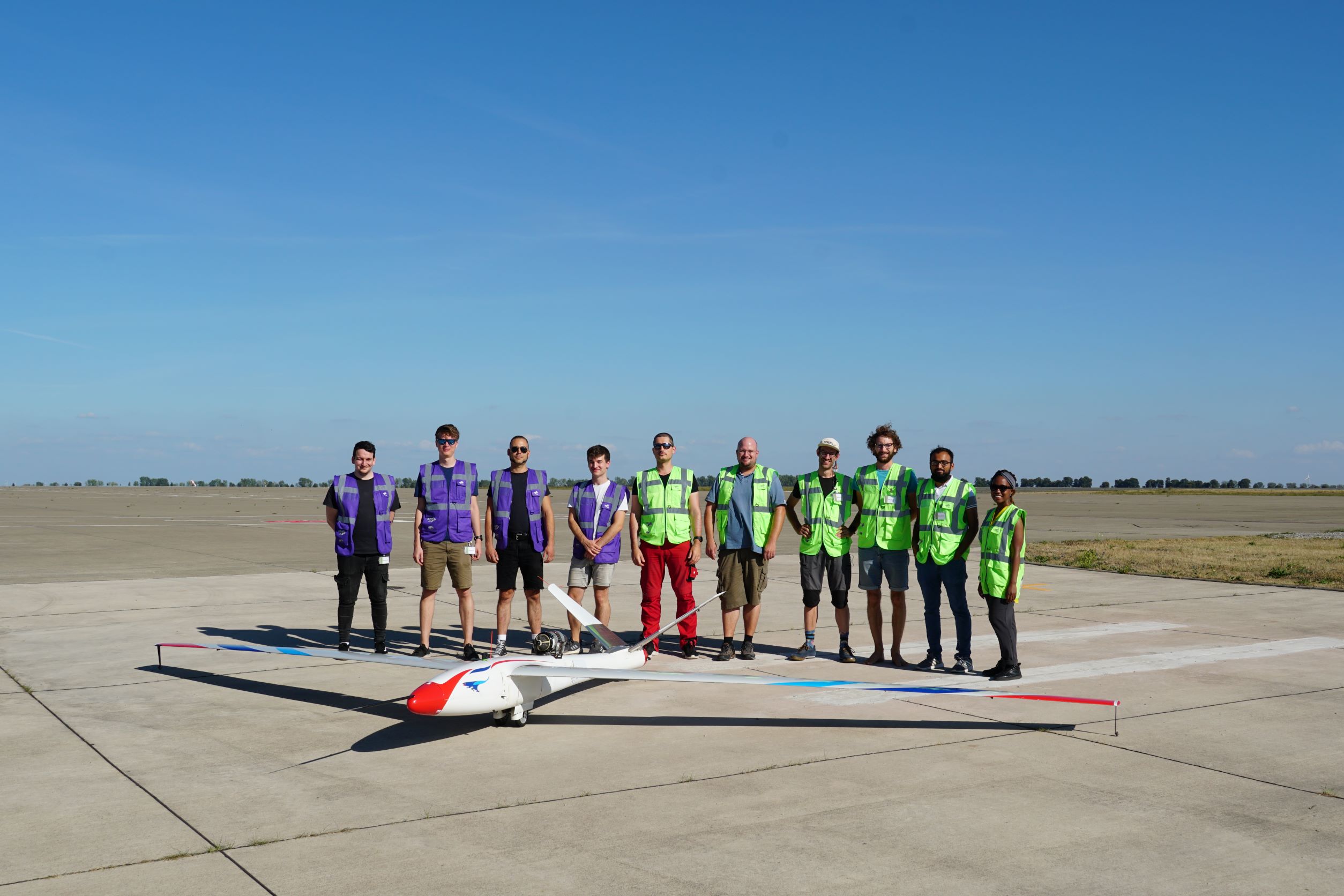 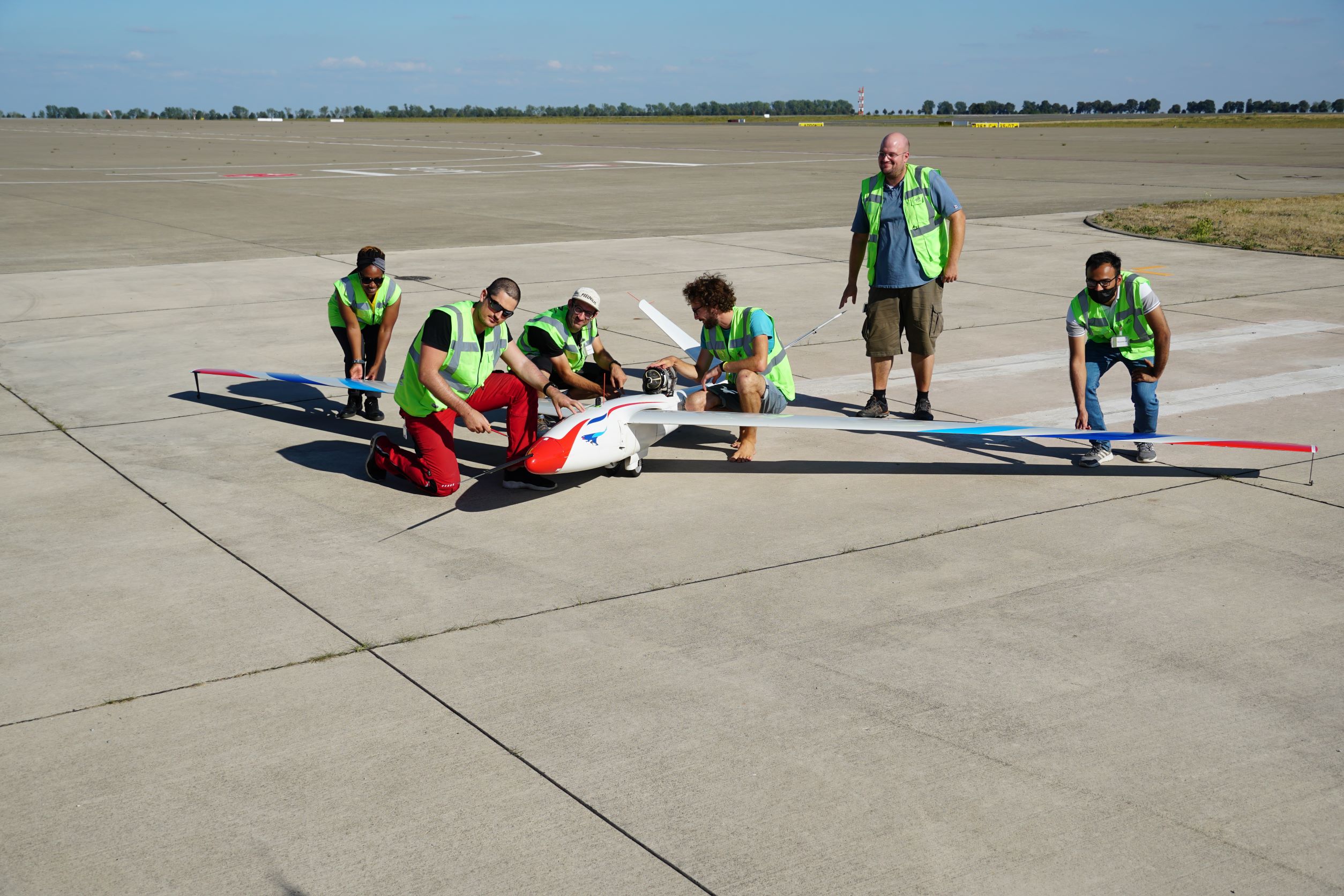 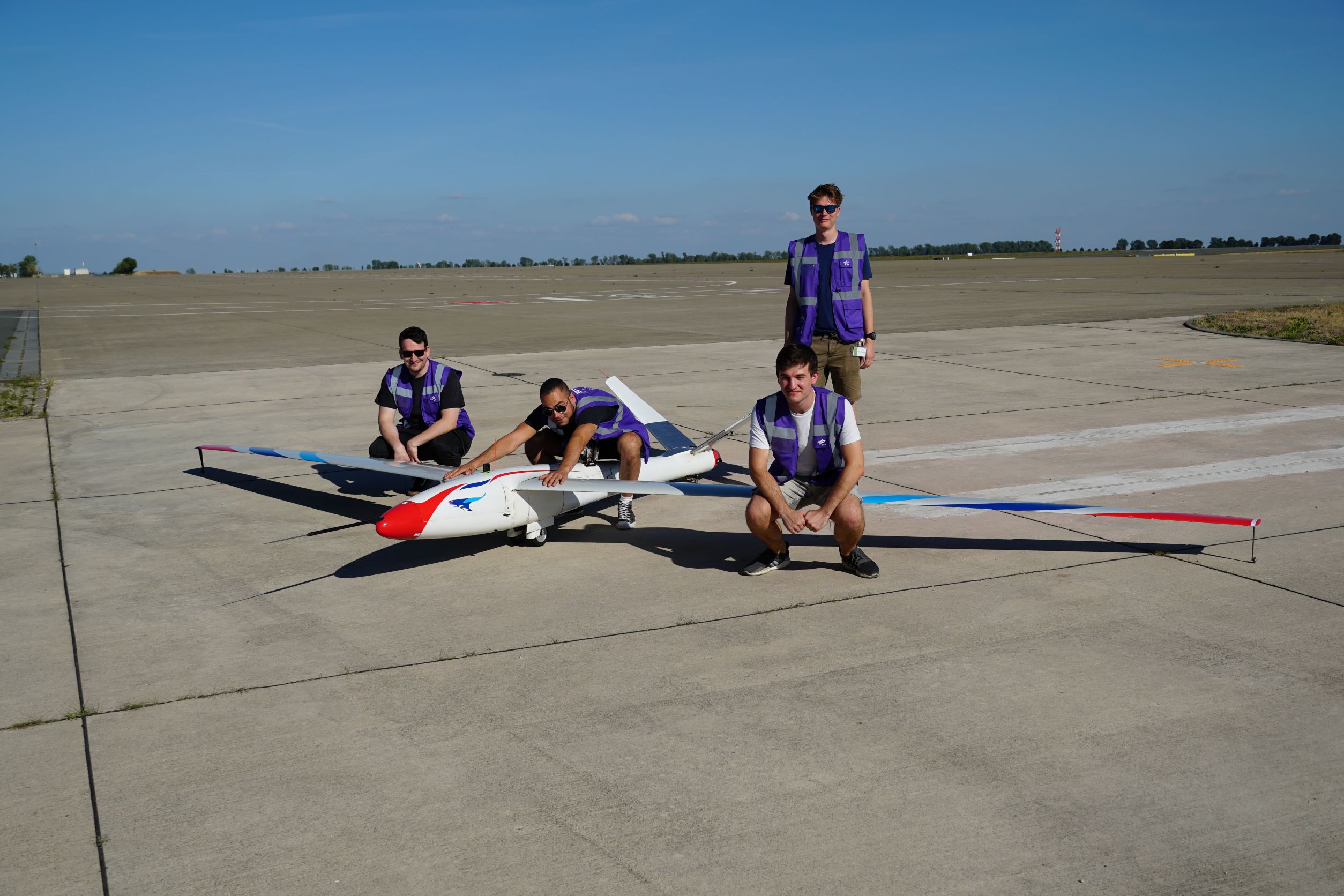 After the long period of ONLINE MEETINGS only the FLIPASED consortium could finally meet in person.

The meeting was organised on the 4th and 5th of July in Budapest, at SZTAKI in hybrid format so also the members of the Scientific and Industrial Advisory Group could join us for the event on the 5th of July. The 4th of July was dedicated to bilateral in-person meetings.

Progress was achieved regarding the following topics: 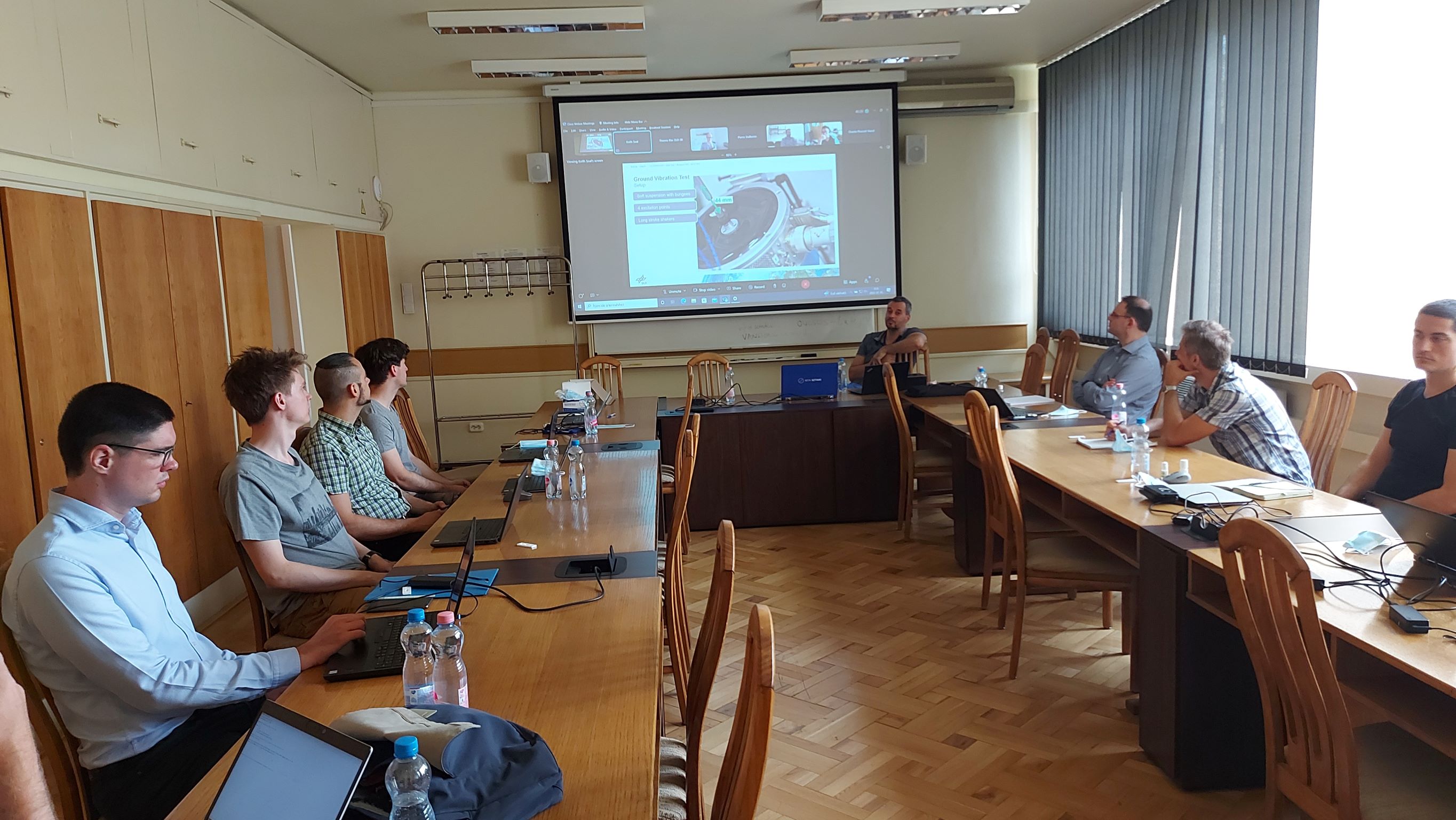 In May 2022 we have flown, crashed, repaired and flown again the T-FLEX demonstrator, within the FLiPASED H2020 project. The project consortium has cleared several goals:

All this was done in 8 flights, during which we got around 140min of flight time.

Special thank you goes to Fabian Wiedemann, who piloted and repaired the aircraft when no one thought would be possible, Julius Bartasevicius who coordinated the whole test campaign, Christian Rieger and Thomas Seren who took their weeks off from other projects to help us pilot the T-FLEX, Daniel Teubl who was there for complete two weeks doing engineering work and Christian Rössler who landed the aircraft during a storm (10m/s+ gusty wind). The teams from SZTAKI (Institute for Computer Science and Control) and German Aerospace Center (DLR) also helped immensely with providing the test airfield, software preparation debugging and supporting the test team. 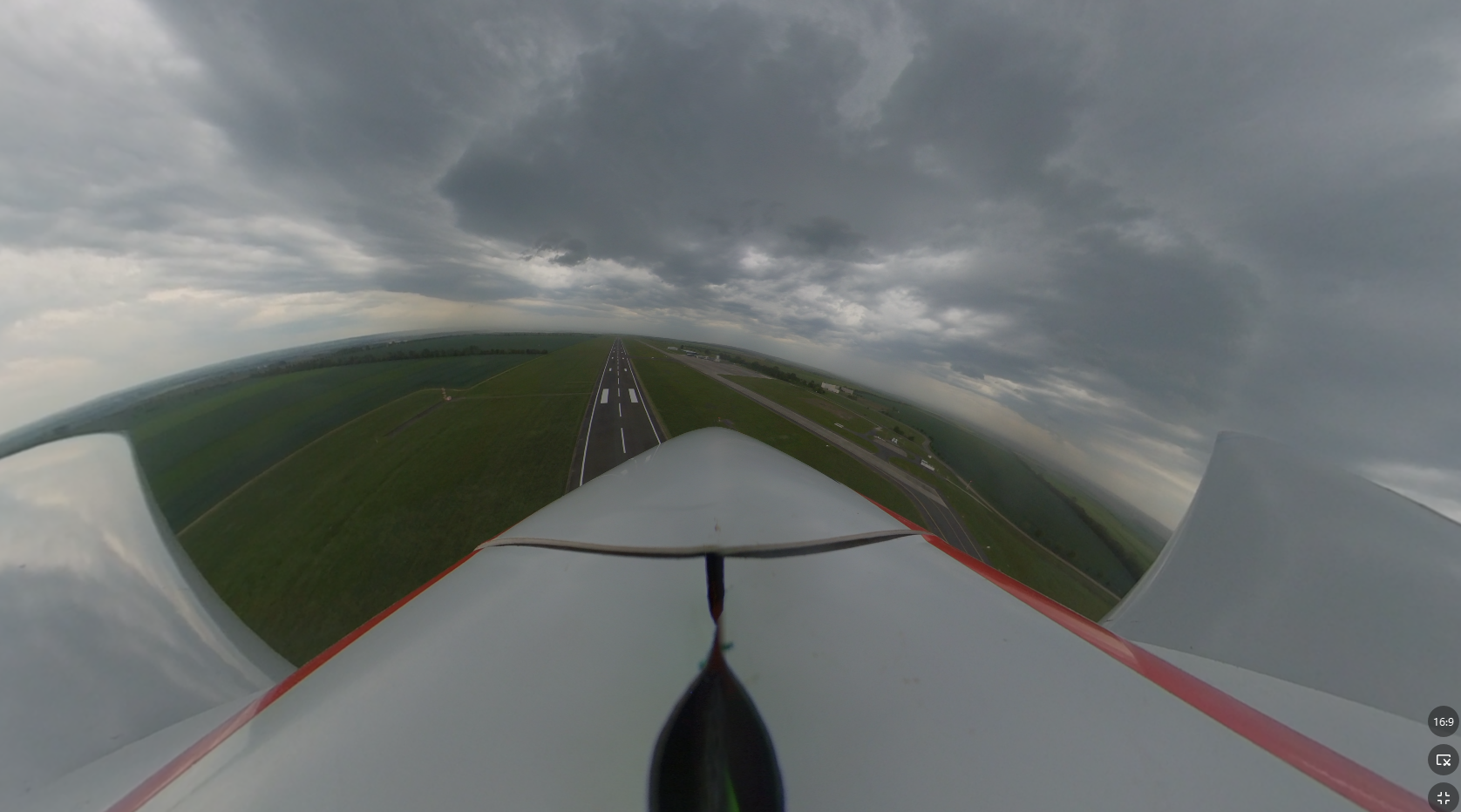 In preparation of the upcoming flight test season the new members of the flight test team are undergoing a training programme at TUM.

The training programme includes studying the Concept of Operations of the project, familiarising with the systems of the TFLEX UAV, learning the peculiarities of Engineer and Operator roles and, most importantly, training communication procedures in the simulator developed by DLR-SR. 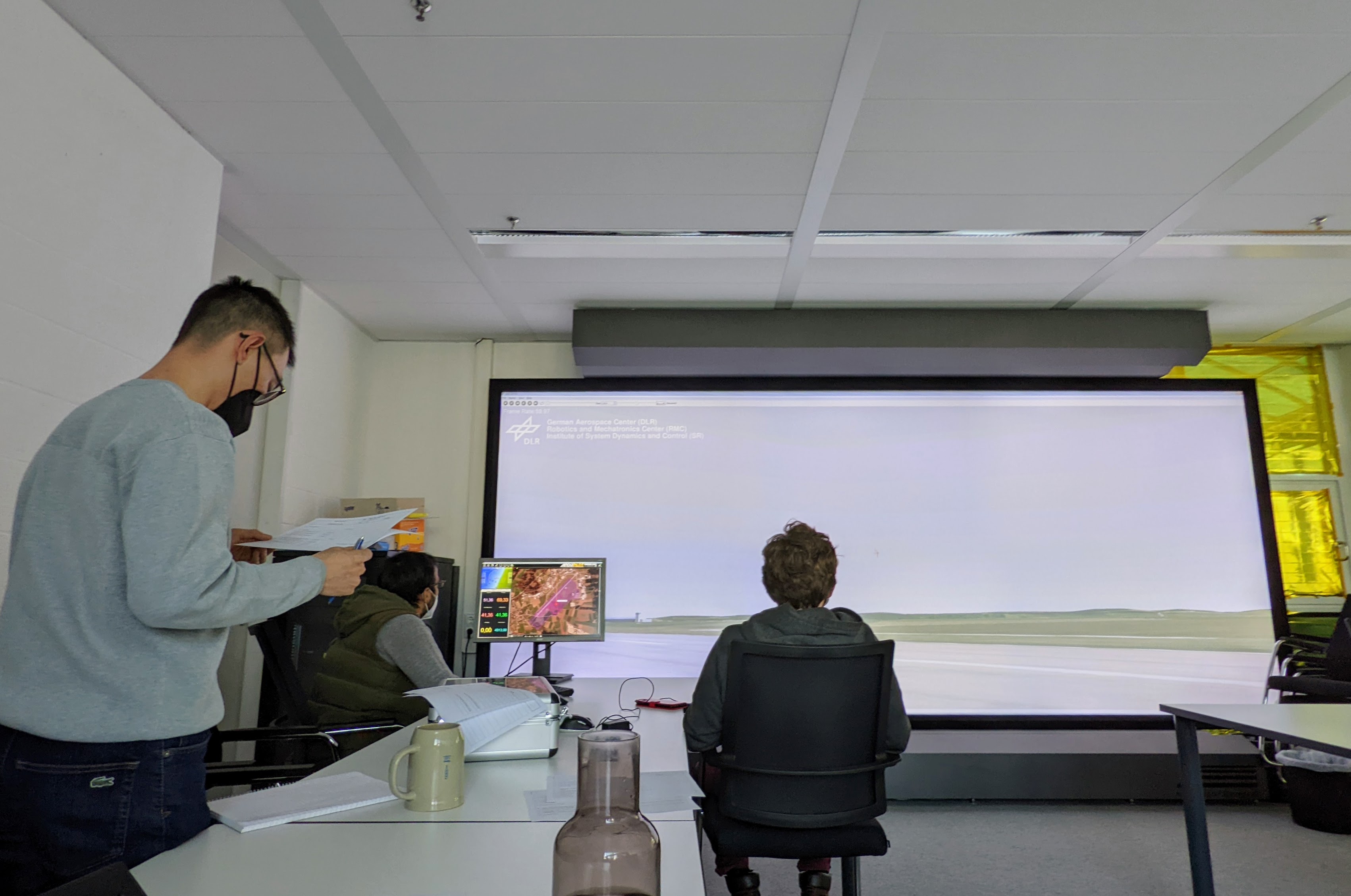 Development teams from DLR Göttingen, TUM, and SZTAKI have joined forces to develop a so-called Onboard Computer II (OBCII) for the T-Flex aircraft. The main task of the OBCII is to run online modal analysis scripts to estimate wing flutter data, like frequencies and dampings. Other tasks of the OBCII include acting as a host for external sensors such as the Thrust Measurement System and to maintain steady connection with the Flight Control Computer. The internal architecture of the OBC-II was designed to be orthogonal and scalable, so attaching and logging data from other sensors does not affect the setup of the other sensors. Successful testing was carried out on the actual aircraft and in HIL environment as well. The team is planning to publish articles in this topic during 2022.

Interested in how does the flight testing of the T-FLEX demonstrator look like? We have published a conference article about the topic at the ICAS conference last year. The article describes the flight test environment of the demonstrator by providing insight into the setup of the aircraft, its systems and flight surroundings. Special effort is made to explain the operational procedures and preparations required to safely perform the flight tests.

A Multiple-Model Adaptive Controller for Gust Load Alleviation has been synthesised for the demonstrator aircraft. It will be especially useful for the scale-up task when different fuel tank levels have to be considered.

An accessible author's version can be found at DLR's electronic library elib.

A thrust measurement system is the latest addition to the measurement capabilities of the T-FLEX demonstrator. The system will be especially useful while measuring testing the different mechanisms to reduce the induce drag in-flight.

The design and testing of the system was presented in the AIAA's SciTech 2022 conference and can be found here. 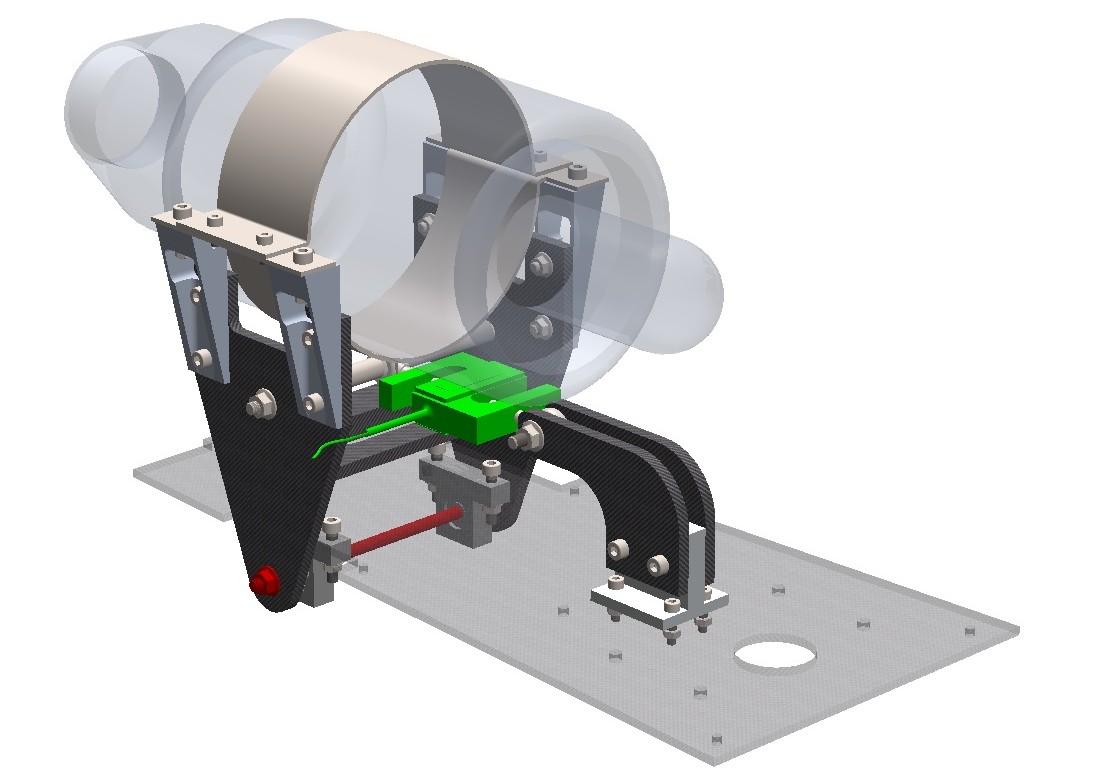 This week SZTAKI team visited TUM in order to integrate the DirectDrive actuator to the T-FLEX aircraft's flexible wing and perform regular flight control computer updates. Because of the pandemic, we ensured a safe work environment with daily rapid testing at TUM facilities and by using FFP2 masks in the lab.

We have successfully tested SZTAKI's custom-developed servo actuator which will be responsible for flutter suppression using the outermost ailerons. This is the DirectDrive which can be seen in the picture below. 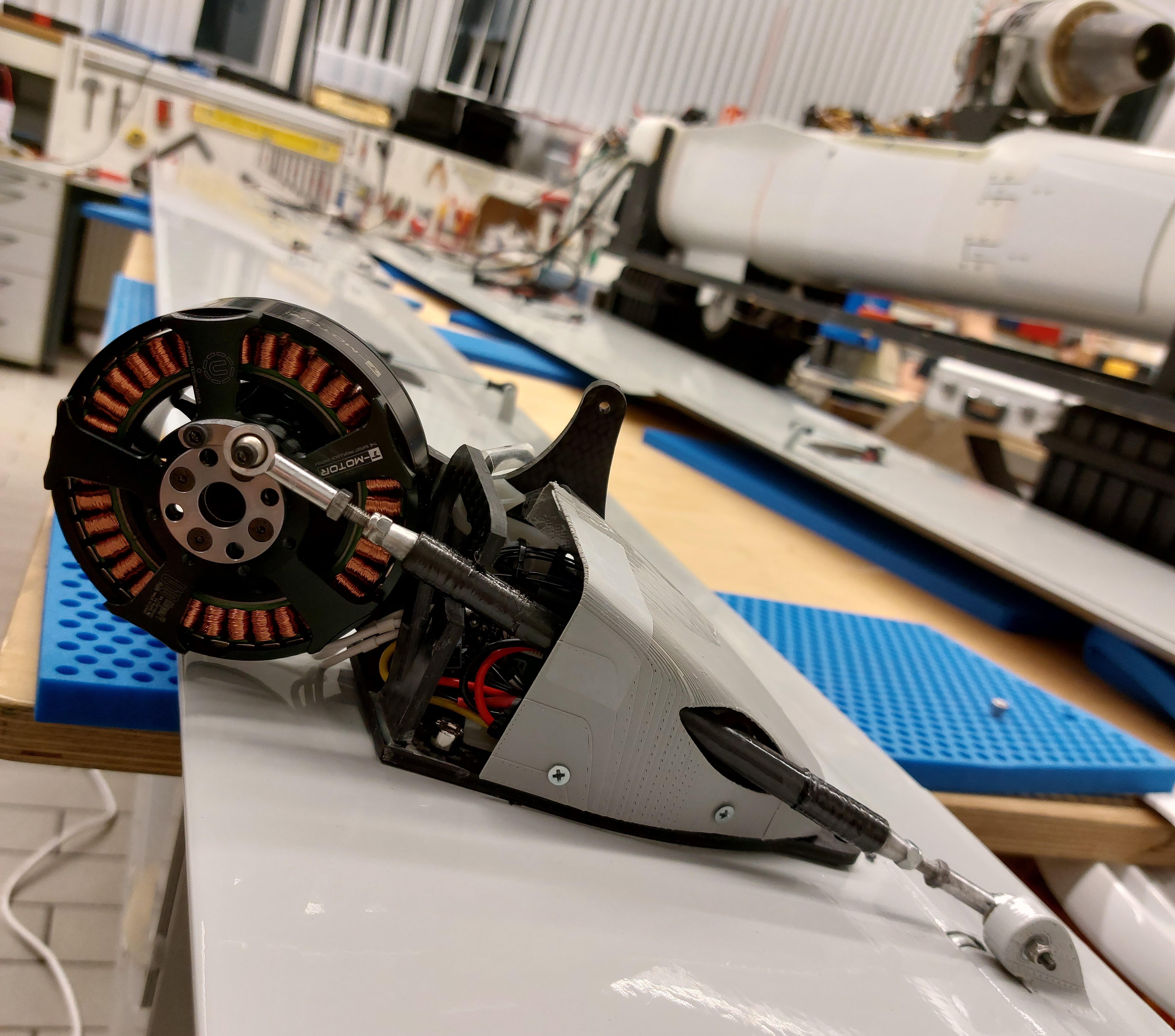 DirectDrive on the wing

In the video, we can see the actuator driven by the RC controller, and some diagnostics information are also shown. The actuator will be controlled by the new "RXMUX2" board after the sub-scale flight tests with SZTAKI's Sindy platform.

We also performed software updates on the Inertial Measurement Unit system inside the wings, upon findings of DLR - to improve operational modal analysis performance. Therefore, their onboard modal identification algorithms can be improved. Further feature requests between the developer teams were also discussed to improve the onboard electronic systems. The lessons learned from recent flight tests were shared with each other.

The trip was considered a success since we got closer to the -1 flutter wing's flight test and the demonstration of active flutter suppression to expand the flight envelope.

Cross verification of the FLiPASED avionics for safety!

On 16th November 2021. few days after the T-FLEX aircraft of EU H2020 Flipased project was flown again in Münich (see below) the researchers of SZTAKI did various flight tests in Papkutapuszta, Hungary on a different UAS platform (rigid wing, dual engine) called Sindy with the same onboard system developed in frame of the Flipased project. Besides the common onboard software and hardware architecture the two aircraft shares the same ground control station and telemetry channels, so the two remote flight test crews - at TUM in Germany and at SZTAKI in Hungary - can share lessons learnt and test solutions without the need of physical presence at the same location. Direction, velocity and altitude hold functions were successfully flight tested as shown in the video. The next step will be the test of the brand new 2nd generation Multiplexer board "RXMUX2" on Sindy before application on T-FLEX. 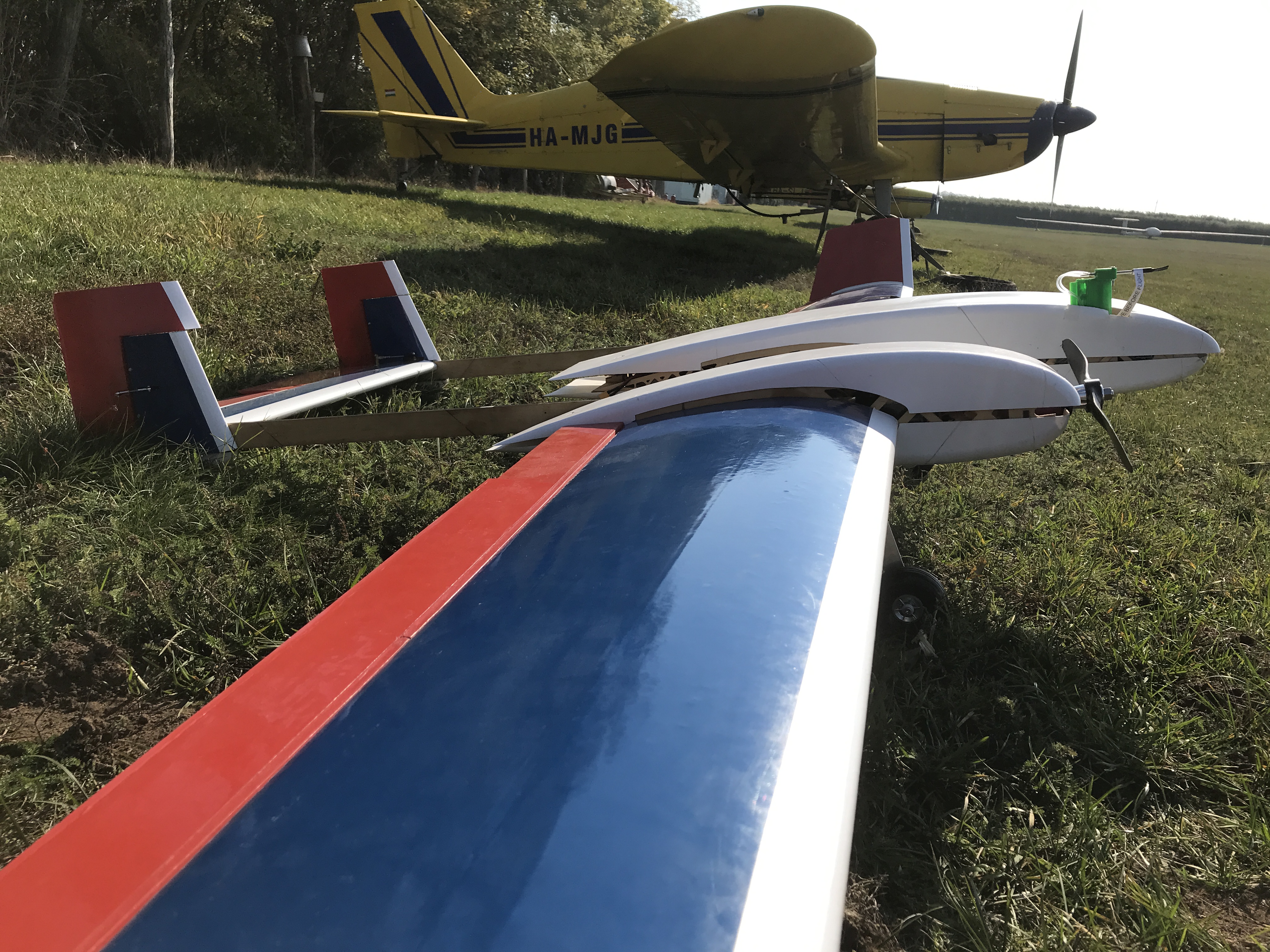 On Wednesday, November 10th , the T-FLEX demonstrator took off for another flight to familiarize the new primary pilot with the aircraft, test autopilot functionality and conduct experiments for identifying the turbine dynamics. Even though the flight was conducted in less than ideal conditions in terms of visibility that prevented the usage of the flight box to full extent and revealed the necessity of refining the autopilot’s stabilized mode, valuable data for the refinement of the autopilot software and thrust measurement system was collected. Furthermore, the flight built further confidence in piloting and operating the aircraft: The new flap configuration for take-off, that was implemented for Flight Test 8 after testing it on the dynamically scaled demonstrator “DeFStaR”, facilitated the critical start run by lowering the required airspeed for lift-off and was trimmed in flight. Finally, T-FLEX landed safely after an uneventful approach. 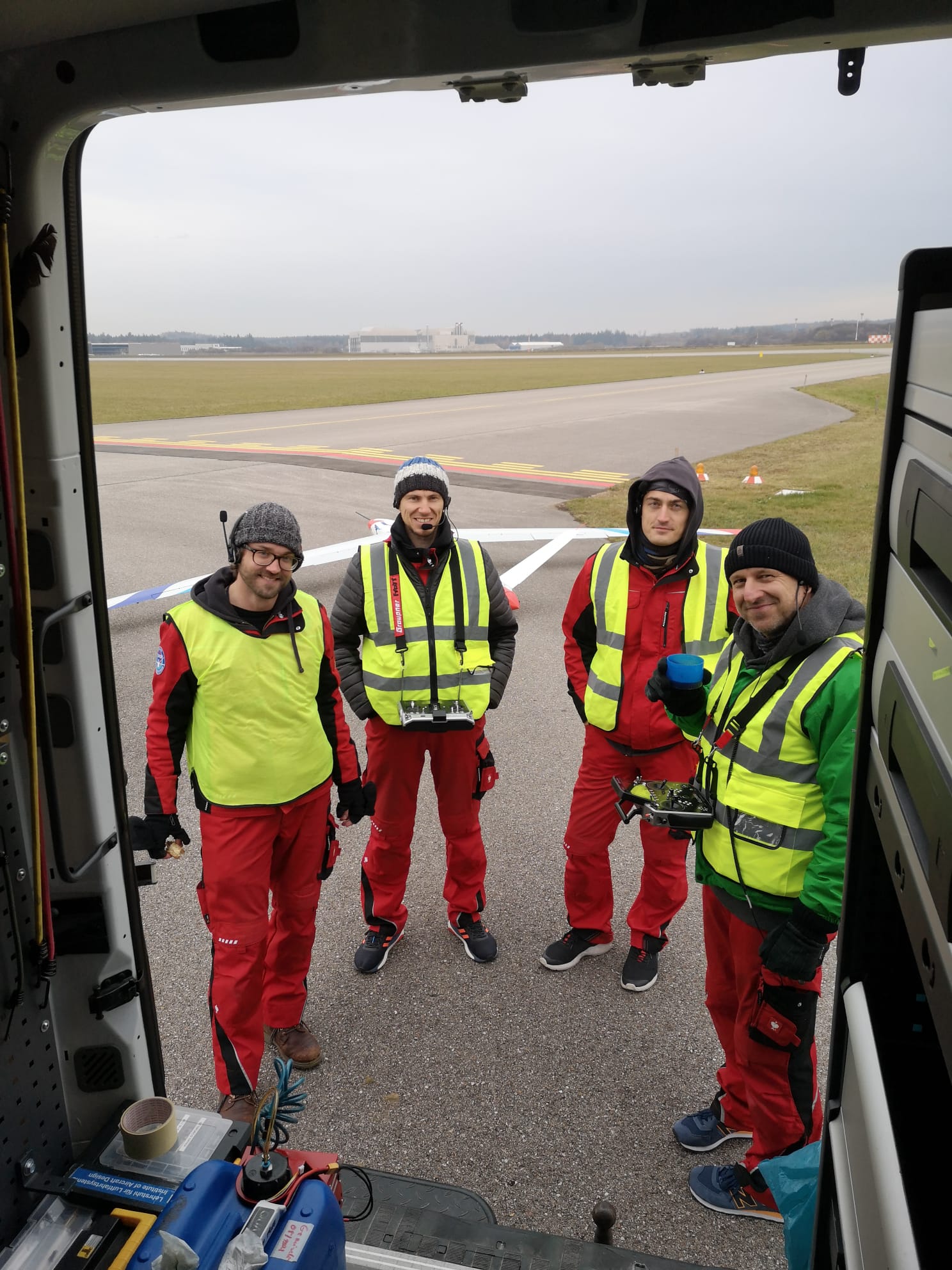 Flight test team, with the demonstrator in the back

After 20 months of online work (due to COVID-related travel restrictions) our consortium has finally met in person at TUM Münich. What a difference the face-to-face occasion makes!

Researchers of SZTAKI, Institute for Computer Science and Control, Hungary, will lead the international project FLiPASED (FLight Phase Adaptive Aero-Servo-Elastic aircraft Design) which intends to revolutionize aircraft wings through developing and testing the so called active-controlled wings. Besides the coordination of the project, to be managed by Bálint Vanek, SZTAKI will work on the fields of control theory and aircraft design in a multidisciplinary environment in order to tighten the connection between the physical configuration of aircrafts and their on-board flight control algorithms.

By today, the wing and propulsion system technology of modern aircrafts has reached the peak of its effectiveness. For both the Boeing 787 and Airbus A350 composite materials account for more than 50 percent of the total weight. Meanwhile, more than 25 percent of the operational costs of commercial airlines is spent on fuel, therefore, more efficient fuel consumption is an important question from both environmental and financial perspectives.

Aircrafts require the proper ratio of drag and lift forces in order to handle varying flying conditions. The goal of the aircraft manufacturers is to reduce drag and save fuel accordingly. This is achieved by a very high degree of slimness (high aspect ratio) of the wings, built from composite materials which are more and more flexible and deformable. However, the wings of the aircrafts are designed to achieve minimal drag only under a single flying condition, determined by the weight, speed, height and range of the aircraft. In varying conditions, the fine-tuning of the aerodynamic surfaces is required to change the lift-drag ratio, however, with the currently available airbrakes and other control surfaces only a rather rough modification can be achieved.

In contrast to previous solutions, the shape of active-controlled, flexible wings can be fine-tuned and they can adapt to various flying conditions. The aim of the airlines is to reach their destinations in the straightest path, and in order to accomplish this, they would fly even through more turbulent conditions (which are more frequent due to the climate change) as well. With conventional rigid wings passengers experience these turbulences more strongly, while with the methodologies developed in the project the flexibility of the wings and the active control together ensure the reduction of physical loads for both the aircraft and passengers. In a same way, different wing shapes can be chosen for take-off and landing, in order to achieve the most comfortable and efficient flying experience. 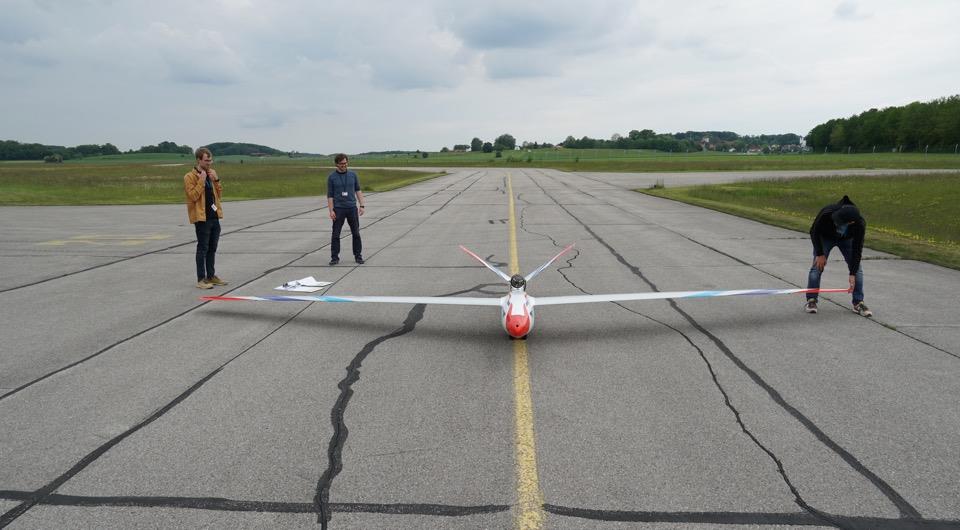 The unmaned aircraft developed for research purposes in the FLEXOP H2020 project, the predecessor project of FLiPASED

Based on the current research results, the effect of wind gusts can be reduced by 20 percent with active wings. The fuel consumption can also be reduced by 10 percent with changing the wing shape during the flight path and with the consequent reduction of the drag force.

More than 500 parameters are measured two hundred times a second on the experimental aircraft, producing a large amount of data (1,5 GB raw data per hour). The Informatics Laboratory of SZTAKI headed by András Benczúr will also participate in the project: processing the data would enable the fine-tuning of the optimal wing shape settings for aircrafts, as the optimal parameters may differ for various aircrafts and also vary with the aging of the materials even for a single plane itself.

The goal of the project is that the results of the research to be obtained by the end of 2022 be applied in practice within a 5 to 10 year period. Therefore, the industrial partners of the project’s advisory board are the world leading airliner manufacturer Airbus Operations SAS, the military and space flight expert Airbus Defence and Space and business jet and autonomous drone specialist Dassault Aviation. The results of the project will be tested not only in simulation but also demonstrated using a 7-meter-wingspan experimental unmanned aircraft built for research purposes. 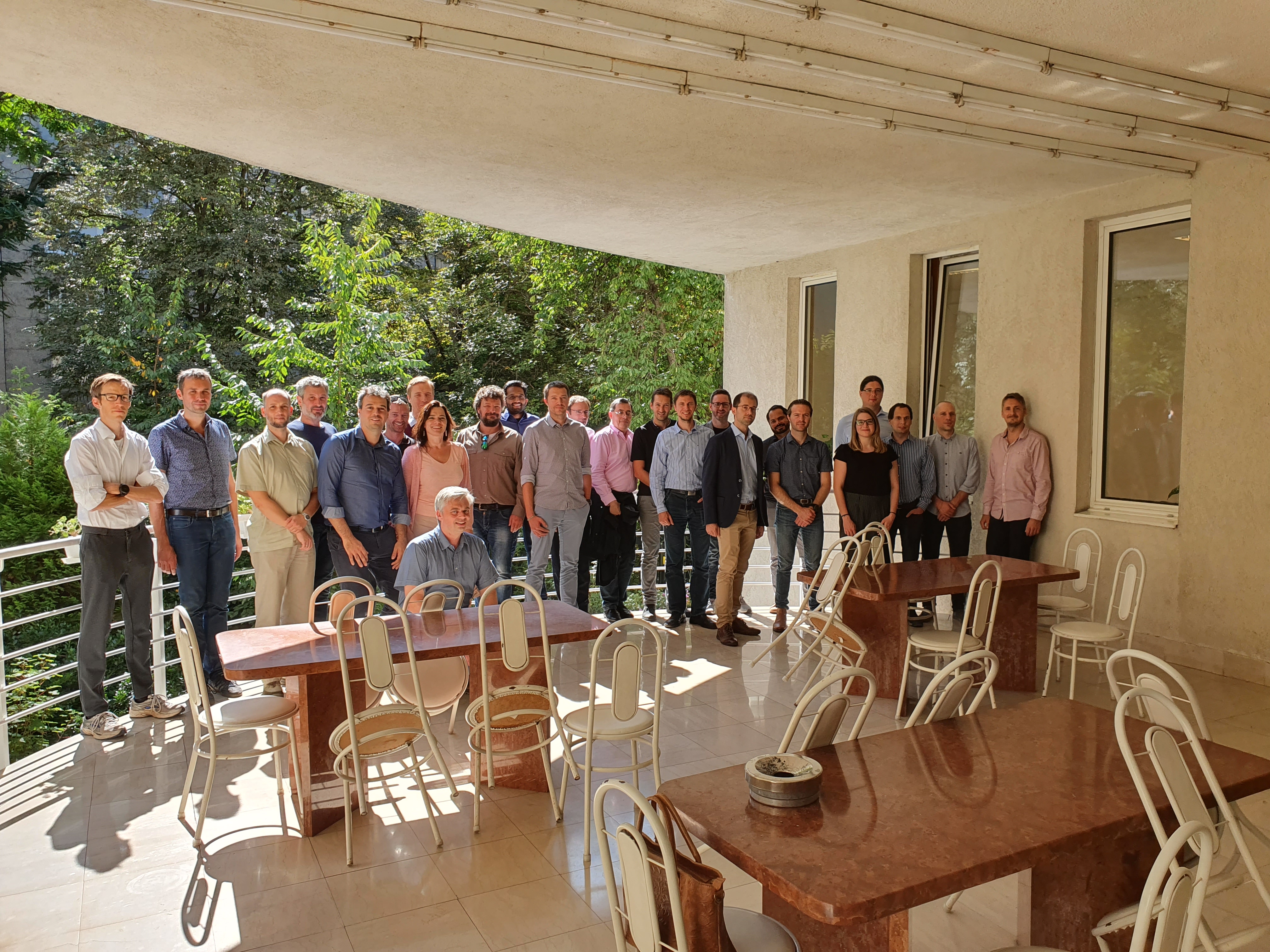